“Behind their lively, searching eyes one senses a doubting, a contemplative personality, always trying to make sense out of a puzzling world.”

Far be it from me to claim that the sky is falling after a backup goalie is sent to the minors and a 4th line forward finds himself on the waiver wire, but the inherent randomness with which both events happened, while not mind-boggling, do offer a certain mystery that admittedly could be nothing.  But, you know, you have to ask the question.

If you follow the Flames, you’ve heard the news.  Blair Jones, the energetic fourth line center and a personal favourite of the author, was placed on waivers Saturday morning.  He cleared them, quite thankfully, but was still a scratch vs. Dallas the following day, as he was against Phoenix on Monday, ostensibly because he wasn’t giving them enough, and they needed more.  What do you think of that sentiment, Blair Jones? 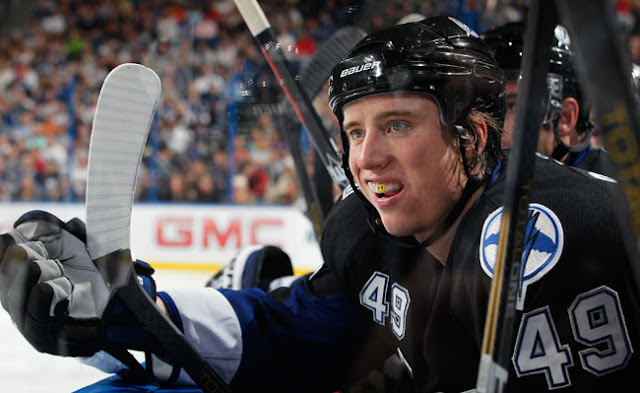 To me, this seems like a tough sell to make.  The Flames, prior to the Dallas tilt, sported a less than flattering 4-5-3 record, and while maybe Blair Jones hasn’t been as good as he can be, your team’s point ledger is almost never attributed to the five minutes a game the fourth line plays.

But it just seemed too…haphazard to be about his performance.   Jones has proven to be the kind of player that will go through hell if it meant collecting a pair of points, and for a team comically devoid of quality centermen, exposing one who was winning a shade shy of 60% of his faceoffs tells a bigger story.  If it was about sending a message to the fourth line, and the rest of the team, as to what happens when you don’t perform optimally, surely other underachievers would have also been disciplined too, yes?

Well, Blake Comeau, who is the most tepid of warm bodies on the team right now, found himself promoted to a line with captain Jarome Iginla and Curtis Glencross, drawing in at center between the two big bodies counted on to shoulder a sizable chunk of the Flames offense.  Oh yeah, he doesn’t even play center.

Of course, Comeau’s stint as a center and non 4th liner lasted about as long as any notion that the Oilers would be a good team this year, but that’s neither here nor there.

And Steve Begin, well,, you don’t want me to finish this sentence about Steve Begin, do you?  (To Begin’s credit, he was the unlikely scorer of the game winning goal against Dallas, which if the Flames coaching staff are the least bit reactive, probably spells the end of Blair Jones for good.  Here’s hoping they are NOT the least bit reactive, because to expect much from Steve Begin on any kind of regular rhythm, is, well let’s say foolish.  It’s foolish)

Similar parallels can be drawn to the plight of what WAS the Flames young incumbent number one goalie, Leland Irving.  No less than three days after SOMEBODY wrote about how waiver wire pickup Joey MacDonald doesn’t matter (whoops), the Flames flipped the whole tandem on it’s ear, sending Irving back down to compete with AHL and life champion Barry Brust for the bulk of minutes in Abbotsford, while recalling the only days previous sent back down Danny Taylor all the way back up to Calgary, while handing MacDonald the keys to Miikka Kiprusoff’s car while the Finnish superstar nurses his MCL back to it’s Awesome Finnish Self.

Again, on the surface, this move looked like nothing more than shuffling the deck chairs for the sake of shuffling deck chairs, and one wonders why they ever went to all the trouble.  Maybe you do see Joey MacDonald, with his far vast resume of NHL experience (that mostly highlights how he’s spent 10 seasons in the bigs being an average tender at best) as a better suitor for handling the replacement starter’s job until Kipper comes back, but it cannot have been by much.  In fact, there isn’t much separating Irving, Taylor, and MacDonald at all, so you could argue that any of them are “deserved” of the job, as loaded of a term as that may be.

Which is why I wonder why they’d bother to have Irving and Taylor swap roles.  Taylor did earn more playing time than Irving in Abbotsford during the lockout, but the backup job in Calgary was essentially always Irving’s, and while his play was unspectacular, it did not serve to be bad enough to lose faith in him completely.  It’s like saying you don’t expect a Buick Le Sabre to win the Indy 500, so you’re going to replace it with a Dodge Sundance.

So again, Jones on waivers, Irving in the minors, Comeau playing center on a scoring line, none of these register as earth shaking maneuvers, but they are all certainly curious, and you have to wonder if something was to come of it.

The Flames are dangerously close to the 50 contract limit, and it could certainly be seen that the Flames are trying to shed salaries in an effort to take on a new one (RYAN O’REILLY LET IT BE RYAN O’REILLY), and it can be argued that this is exactly what’s happening.  Blair Jones, bless his heart, offers you more value than Comeau, or Begin, or Tim Jackman, as he has more offensive upside and is a smarter player.  He’s more likely to be useful to other teams, so he’s the one who goes on waivers, thus shaving off one contract that no longer applies to the limit.

That plan, of course, was foiled when Jones passed through the waiver wire unclaimed, but that’s not to say that Jay Feaster and his managerial team don’t have other alternatives planned.

And if there is something bigger at play, it had better be good, because the moves they’ve been making have actively made the Flames less competitive, or served as a distraction, and if that’s how you plan to lure and retain some higher quality players, well let me tell you, Ryan O’Reilly isn’t going to sign a contract for you.   On the flipside, if they’re trying to tank to convince Jarome Iginla to waive his no trade while simultaneously scoring a higher draft pick, don’t beat around the bush, and just do it.  It’s getting hard to watch.

And for the love of Odin, stop putting Anton Babchuk in the lineup!  That one is as indefensible as it gets.

Hi friends, do you think you could take a moment to go help us here at the Spec hit our crowd-sourcing pledge? Your contributions would help this fine site continue to showcase the finest writers the Prairies has to offer. As an added bonus, The Book Of Loob will be your friend. Or, if you’d prefer, he won’t. Check out http://www.indiegogo.com/projects/the-spectator-tribune if you like what you see and want to help! We love you!